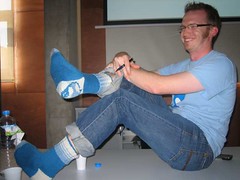 I have to say, I might be addicted. The post-drupal conference mixture of utter exhaustion (plus jetlag) and renewed energy and excitement is a feeling that I've really grown to look forward to twice a year. This is one great community full of great people. i love you all!

As promised, I gave 3 presentations... all of which went well (I thought):

In addition to those three, I also took part in a couple of panels: the live podcast was a lot of fun - go check it out!

I was also on the Drupal Association panel. This was interesting - it was clear that as a young organization - we still have a lot to learn and a lot to do. I was sympathetic to the concerns raised, but there has been a lot of discussion amongst association members since the panel and hopefully we'll see some positive changes forthcoming.