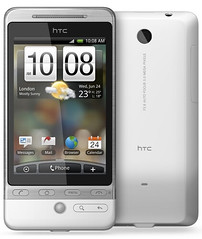 Almost exactly one month ago, I made the switch from my old, 2g, jailbroken iPhone to a brand new fully legit android phone: the HTC Hero.

My reasons for the switch were varied - it’s a platform I’d like to support, hack on and one I generally find interesting. I’ve also grown increasingly frustrated with my suite of Apple products and, in general, am looking to “live open” (more on that later).

There are some things that I absolutely love about the Hero: way more than the iPhone:

This isn’t quite the ultimate phone yet. Here are my top gripes:

Overall, though, I’m happy about the switch. I think the Android future is bright and hopefully I’ll have some spare time here and there to hack on some things in support of the platform.